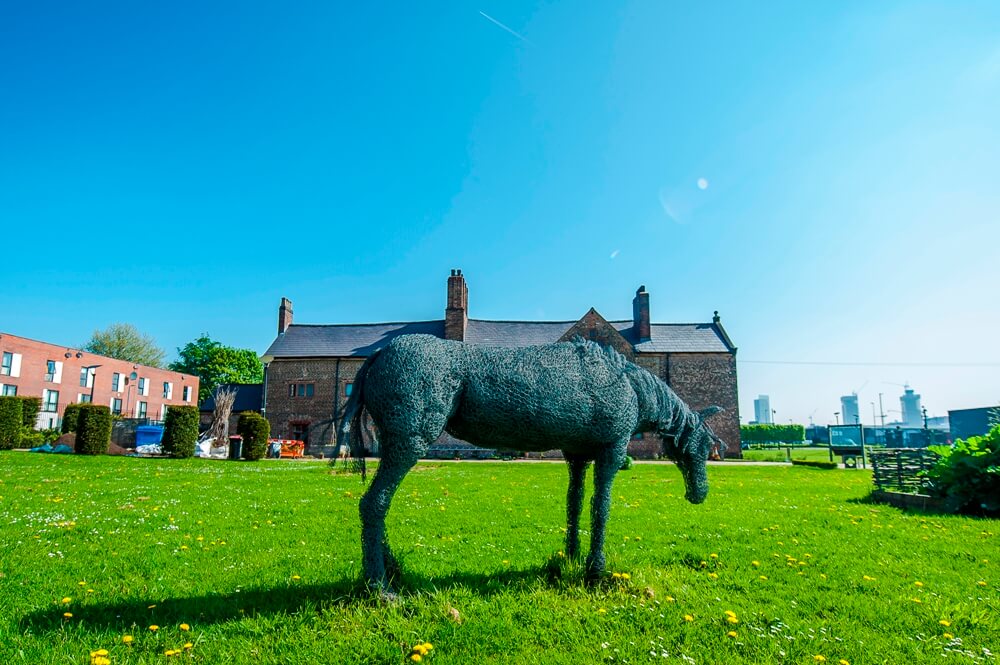 In partnership with Salford City Council and the Heritage Lottery Fund (HLF) a programme of community and public art schemes was developed as part of the major project to develop and conserve Ordsall Hall.

‘Moat’ by John Kennedy of Landlab was completed in May 2011. This imaginative commission highlights the location of the Hall’s original moat. The concept for the moat extends the idea of pretending that the moat is real and full of water. He also has another exhibit here called ‘Causeway Edge’.

The second public art commission ‘Timeline’ was developed by Lesley Fallais. Ordsall Hall is a Grade 1 Listed building dating from the 14th century, with significant architectural and archeological significance. As such Lesley has created a ‘living timeline’ which reflects the social change at the Hall over the past 800 years.

In the summer of 2015 two artists took over Ordsall Hall for the temporary exhibition ‘Messengers and Promises’. The exhibition was based around the human relationship with animals and included drawings and paintings by Kate Herbert and sculpture by Angela Sidwell. One of the artworks remains in the gardens:

The Day’s End, Steel and wire

“It felt right to make a full size working horse that would sit amongst the surroundings at Ordsall Hall, conjuring up images of the past when there would have been a working farm here. There were several paintings of horses that I looked at in Salford’s collection, but it was Preparing for Market  by John Frederick Herring, that I drew most inspiration from. I really liked the horse’s restful posture, before his long day at work, and imagined him later resting at the end of the day. For the actual body shape of the horse I looked to one of my horses – Poppy – who although not particularly tall is built like a tank. I can really imagine her in a time when horses were vital to man’s work, whether on a farm pulling carts, or “down pit” using her stamina and strength to earn her keep.”

Angela Sidwell is a sculptor from Cheshire working predominantly in wood, wire and textiles. She has been working and exhibiting as an artist for the last fifteen years including creating large scale public art features, working in schools as a 3D specialist and exhibiting in galleries and outdoor sculpture events. Animals and the issues that surround them have always been pivotal factor in her work.

Sign up to our mailing list and be the first to find out about our latest news, offers and forthcoming events. Stay in the know, on the go.